Your site doesn’t have any tags, so there’s nothing to display here at the moment.

Coaching children can be an affluent and enjoyable experience. Furthermore, it is also a wonderful responsibility. So coaches can play a pivotal role in the development of children’s different  basic motor skills and their long-term attitudes to, and passion for, sport and physical activity (Sports Coach, UK; 2006).These are the basic and most important things for children in relation to long-term involvement and achievement in sports and physical activities. Countries like Australia, United Kingdom, United States of America, Canada, Germany, etc; which are successful in sports have put maximum efforts on talent identification and youth development. So, it is very much necessary for each and every country to have a long-term development plan for coaching children. 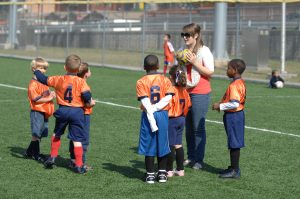 For being a successful performer at the highest level, one should need to start a routine process which starts very early ages of a child and takes more than ten years (Bloom, 1985; Ericsson et al, 1993). It depends on the children giving importance and enjoying the practice of physical activities. That’s for all the people like Coaches, Teachers, parents, etc all play a vital role in the early stages of development. This section focuses on different models of LTPD. In every sports children need to go through some common stages of development where sports specification is irrelevant. This article will describe those Long- term Player Development stages with little bit focuses on football.

There are very few sports which are fallen under early specialisation sports, so in most of the cases late specialisation model is taken as a standard model for talent development.

In this stage coaches or trainers need to implement fundamental movement skills. There is one subdivision of the stage which is learning to train and use in the age group between 8 to 11 years ( Bayli and Way, 1995).

In this stage, young athletes gain knowledge of one specific sport and basic skills and expertise. They also learn how to train themselves in order to get little mastery on that specific sport. Athletes are introduced to new training regime with warm up, recovery, cool down, motivation, nutrition, etc.

This stage is more goals oriented as athletes train themselves for competition. In this stage ratio of athlete’s technical, tactical and physical development training and competition specific training is 50:50.

2.1.5 The Retirement / Retraining Stage: This is the last stage of athlete’s career.

There are three stages as per Bloom talent development model. The model focused on characteristics of athletes/performers, coaches and parents/carers (Bloom, 1985).

Where Balyi’s model is more based on biological or physiological, Cote’s three stages model of development more emphasizes on the psychological aspect of the athletes. Cote and Ericsson (1999) and Cote an Fresher-Thomas (2007) developed the Bloom’s model which is described next, 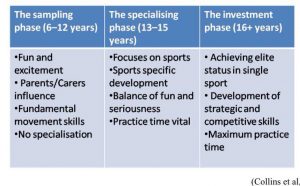 There are mainly four aspects which coaches, teachers or parents should care about early age athletes. According to Craig Simmons (2003) of The Football Association (The FA), Technical, psychological, physical and social is those four aspects which coaches, teachers, and parents should look after very carefully. This four corner model part of talent development in English football which adopted from Bayli and Way’s (1995) LTAD model. The next part of this essay will discuss each and every aspect in details.

In the early ages, technical issues are very important in relation with how coaches/trainers structuring their coaching sessions. Coaches/trainers need to focus on basic learning skills and movements of different sports. Children aged 5 to 8 years old play the game of their choice with fun; in this case coaches/trainers need to focus on small sided game (4v4, 5v5, 7v7) which allows them more time to improve their basic skills. Playing different types of sports for fun can also develop their different movement skills. On the other side by group practice and rotation of positions develop their tactical skills at such a young age. From 8 to 11 years old athlete should need more time on their basic skills and techniques (Simmons, 2006).

Human has six phases of growth when it comes to physiological aspects of human. Phase 1 is called Chronological age (0-6 years), phase 2 is age 6 to the onset of the growth spurt (GS), phase 3 is from onset of GS to PHV, phase 4 from PSV to slow deceleration, phase 5 from slow deceleration of growth to cessation of growth and the last phase is cessation of growth. First, 2 phases are very much important as proper physical activities can make a huge impact on the young athletes. So, coaches/trainers need to take care of proper physical activities. Thus, fundamental movement skills are very important at this stage. In the very early ages coaches need to focus on locomotor skills like running, jumping and manipulative skill like throwing (which is called RJT). Other fundamental skills like catching, kicking (CK) is also needed to develop for future practice. Age 9 years to 12 years is very important as children develop more fundamental skills based on agility, balance coordination and speed (ABC’s) (Balyi and Hamilton, 1995; Rushall; 1998; Viru et al., 1998).

Coaches/trainers should always consider social issues or background of the young athletes, so they can take appropriate methods to develop the young talent. There are so many different things can come under social issues like athlete’s family and their environment, friends, self –esteem, parental support, communication and interpersonal skill, health, etc. The family is a very important tool to consider for coaches. A young athlete can be affected by parents, siblings or even sometimes diverse situation of the family (Collins et al, 2010 cited from Kay, 2003). Parental support is another very important social issue for coaches/trainers to deal with. There some kinds of parents who can make a negative impact on their child. Coaches/trainers should identify those different types of parents with following behaviour towards their child.

Coaches /trainers also need to work on those young athletes who don’t communicate too much and socially very disconnected. Those athletes may lack self-esteem so; coaches/trainers need to encourage them by supporting. There can be some athletes have some health issues as well, in this case, Coaches/trainers need to motivate them by treating them equally with others and sometimes stand beside them and protecting them from discouraging people.

Germany is one of the most successful football nations in the world. They won three World Cups and three European cups till date (German Football Association Official website, 2013). The following table is a model of long-term player development in football in Germany. 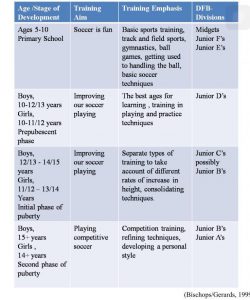 Developing youth is very time effective but once it has done scientifically, it can be a fruitful one as well. With proper implementation of Bayli’s LTAD model, organisations can achieve a sustainable development in youth development. Now, so many countries and organisations are using LTPD model, in return, they are getting positive result as well. The English Football Association, Canadian Olympic committee already using this model for years now. Most of the successful countries in sports emphasize on youth development. This is simple, the maximum effort with optimum results. According to LTPD model coaches really need to work tirelessly on technical, physical, psychological and social issues. Not only coaches or organisations, parent/carers also can play an important part by involving themselves. The Foremost thing is to develop kids or youth talents; secure a golden future for the country.

Findlay, L.C. and Coplan, R.J. (2008) ‘Come out and play: shyness in childhood and the benefits of organised sports participation’, Canadian Journal of Behavioural Science, 40(3) 153-161.

No comments to show.
TacticalPedia, Coaching Your Way

No comments to show.

SCAN THIS QR CODE WITH YOUR PHONE